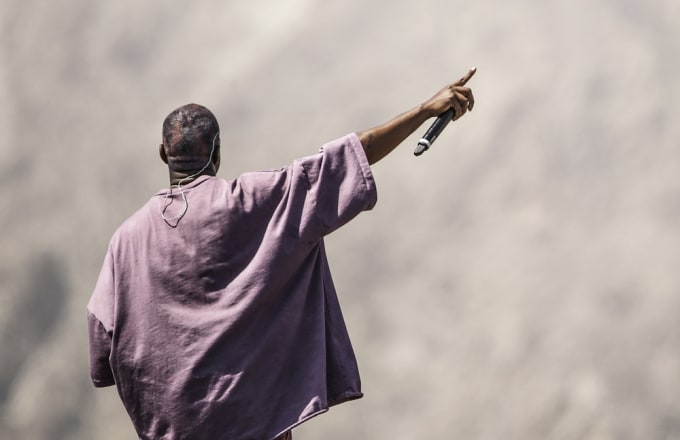 The merchandise lines seemed to go on forever, as the people of Coachella waited patiently to grab a pair of socks that read “Jesus Walks” and “Church Socks,” and a sweatshirt that read “Sunday Service at the Mountain.” The merchandise ranged from $50-$225 dollars and can currently be found at a store online.  These are just two examples of the items sold at Kanye West’s pop up shop, promoting his new church, or as it’s been called “Sunday Service.” West has been holding these services since January, but they are invite only and the attendees are required to sign a nondisclosure agreement before entering. At Coachella though, anyone who attended the festival was allowed to go. The crowd added up to over 50,000 people. Many celebrities also showed up, including Justin and Hailey Bieber, Chance the Rapper, 2 Chainz, and many more. The event was live streamed all over the world, and left people a little confused, as it seemed to have been filmed through a pinhole. The “stage” he performed on was a hill that was created just for his performance.

West’s two to three hour set included about 25 songs, ranging from covers to Kanye originals, although Kanye didn’t seem to perform much until “late into the set,” says Pitchfork.  DMX did the opening prayer and Chance the Rapper chimed in with his verse on “Ultralight Beam.” DMX prayed: “Father please walk with us through the bad times as well as the good, may we be heard and understood from the suburbs to the hood, may you judge us by our hearts and not by our mistakes … may you fill that void in our souls and lay our fears to rest, there’s no way we can live for Jesus when we’re living in the flesh.” He continued, “So I pray that you allow our spirits to be born, grow strong, move on, know right from wrong, praise God.” At the end of the service West reportedly got emotional, to the point of him getting on his knees. He started to cry and his friends immediately went over to him, to comfort him.

Here is the setlist, from Rolling Stone:

Many people who love Kanye West have their own opinions on his “Sunday Service” and the direction he’s going. Some are along for the ride, and are hopeful for a rumored new album to be announced. Others think that he’s gone off of the deep end and are second guessing their loyalty to him. Regardless, West seems to have the support of many celebrities, and obvious support from the Kardashain/Jenner family. His Sunday Service seems to be just the beginning to a new found love of church for him. Do you think he’s genuine or has he gone crazy? Only time will really tell. For now, people will be rocking their $225 sweatershirts in support of the “Sunday Service at the Mountain.”