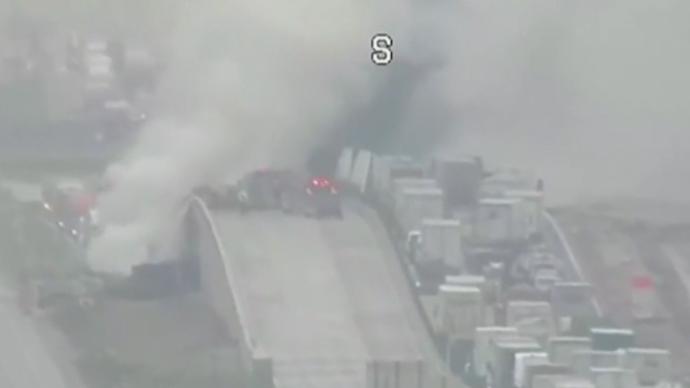 On a normal Wednesday in Racine county, a five vehicle crash occurred on the 1-94/41. So far, the authorities know that two people were killed and three additional people were injured. An officer from Racine county, by the name of Sheriff Christopher Schmaling commented that this accident in particular was the worst he’s ever seen in his time as Sheriff. The freeway had 10 miles of it that was closed of for hours and hours.

The accident happened at 11am, according to investigators, and was the result of a tractor trailer colliding with the median. The truck driver was driving south bound when he crashed into the concrete median barrier. The barrier then was sent into northbound traffic, while the tractor-trailer combusted into flames. As a result, three cars driving northbound also struck the barrier, because it had been pushed into their lane.

All the while, a second tractor-trailer was traveling northbound and was swerving to avoid hitting other cars that had already been hit. The driver must’ve lost control and ran right off the side of the freeway and also burst into flames. Both semi truck drivers were killed. No cause was mentioned. Two other drivers involved were seriously inured, while the third walked away with minor injuries.

At the site of the accident, the speed limit has been 60mph. That particular part of the freeway has narrow lines, due to the undergoing of a massive construction project. The authorities received calls of the accident, with the witnesses describing hearing explosions. That was most likely due to the fact that the trucks’ tires had blown up when lit on fire.

The sheriff on duty is calling the semi truck driver a hero, for his bravery and courage to swerve to avoid hitting other cars, which in turn then saved lives. All victims’ names are not being released until all family has been notified and gives their approval. One victim was taken to a hospital in Wauwatosa while another was taken to a burn accident in Milwaukee. An emergency helicopter had been called to the scene of the accident to assist, but could not fly, due to the extreme weather conditions. As a result, the company sent an ambulance, because it has the same capabilities as their helicopter. Many paramedics and ambulances rushed to the scene, all coming from different stations across the surrounding area.

According to Journal Sentinel, “officers from Milwaukee, Kenosha and Walworth counties were called to the scene to help Racine County authorities with traffic control around the crash.” The accident occurred about 25 miles south of downtown Milwaukee. As the emergency services arrived at the scene, they made reports of black smoke filling the area. They also reported how difficult it was to get through traffic, as it was gridlocked, because of the accident. Officers were reporting “We have multiple victims here right now that need help,” and “We have multiple vehicles in flames. We’re still assessing how many victims we’ve got.” There were other reports of a victim who had sustained burns to his arm and head that seemed severe.

As officers assessed the scene, one in particular, thought he had seen a hazardous sign on one of the tractor trailers but the fire made it impossible to tell. Just in case though, they made the perimeter around the accident very wide, as a precaution of the former explosions happening.

Normal routes that normally took 10-15 minutes were now taking 90 minutes to 2 full hours. Traffic was being redirected on all ends. Welcenbach Law represents clients who have been involved in all kinds of car accidents. Their Milwaukee Personal Injury Lawyers will fight to get you the justice that you deserve. If you or a family member needs help, call (414) 774-7330 to schedule a free consultation.